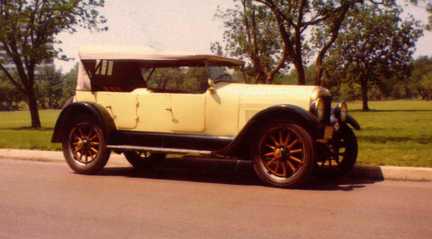 This auto is a 1918 Paige Model 6-55 Larchmont four-passenger touring car, built by the Paige-Detroit Motor Car Company. It has a 300 cubic inch, six cylinder Continental engine (#10D76920, dated 4-11-18). The low compression engine produces about 30 horsepower. It cruises at about 30 mph. The builder's plate on the frame shows chassis 76986 and motor 76920. It's a heavy car that is stopped by mechanical brakes on the rear wheels. For competition purposes it's in Antique Automobile Club of America Class 16 (gas vehicles, more than 4 cylinders, 1913-1919).

It's an attractive car, but the finish is not accurate. The body should be dark blue, and the chassis should be black, instead of yellow and green. The upholstery should be green-blue leather, not brown Naugahyde. The top frame came from a different car and is not the right shape. The radiator shell should be painted blue or black to match the body or chassis. The brass trim should be painted or nickel-plated.

Paige has always been known for its styling, and that is true of this Larchmont:

The March 3, 1918 San Antonio Express newspaper, San Antonio, Texas, page C2, has an ad for this car, price $1895. The ad was from the Paige and Marmon agency in San Antonio, the Suchy-Wheeler Auto Co., Crockett and Navarro Streets. (In May 1918 it became Wheeler-Lacey Auto Co.)

I have an undated photocopy of a San Antonio Express newspaper article from early 1918 that contains the following, describing the unnamed Larchmont as a "sport roadster":

Cabriolet and Sport Roadster Are Shown in Early Auto Salons

Among the novelties in motor driven vehicles the show period of 1918 reveals are two new models that are being added to the Paige line of automobiles. . .

The two new models added to the unusually complete Paige line, and which are shown to the public for the first time at the New York show, are the "Six-39" Cabriolet and the "Six-53" [sic] Sport Roadster. . .

Distinction and originality were especially sought in designing the new Sport Roadster. Low lines and the modified width of the body, coupled with a somewhat high and powerful looking hood, give the car a raciness that will doubtless appeal to many.

The body would usually be termed a four-passenger, but in a pinch a fifth person could ride in comfort. The windshield is a new style, carrying but one piece of glass. The top being low and narrow conforms to the racy character of the general design.

The Sport Roadster is finish in a new shade - Rols [sic] Royce Blue. The upholstery is in green-blue pencil-grain leather. A nickled metal moulding [sic] is used to edge the upholstering. . .